From the Shelby American World Registry

Probably one of the strangest chapters in the Shelby story concerns Carroll Shelby’s partnership with Mexican businessman Eduardo Velasquez. It began with Velasquez’ purchase of a Mustang notchback from Shelby in 1965. This car is thought to have been one of the two prototypes used by Ken Miles to determine the baseline for GT350 suspension components. When Velasquez received the car it had GT350 suspension and brakes, and was powered by a Cobra 289 competition engine. Velasquez’ team raced the car in Mexico in 1965 and 1966, establishing a record often 1st Place finishes, three 2nds and one 3rd out of 17 starts.

One thing led to another, and by 1966 Velasquez had become a Shelby parts dealer, and in 1967 he entered into a partnership with Carroll Shelby which resulted in a company called “Shelby de Mexico.” It produced modified versions of the Mustang which were sold through Ford dealers in Mexico. The parts used to modify the cars were, naturally, Shelby parts. 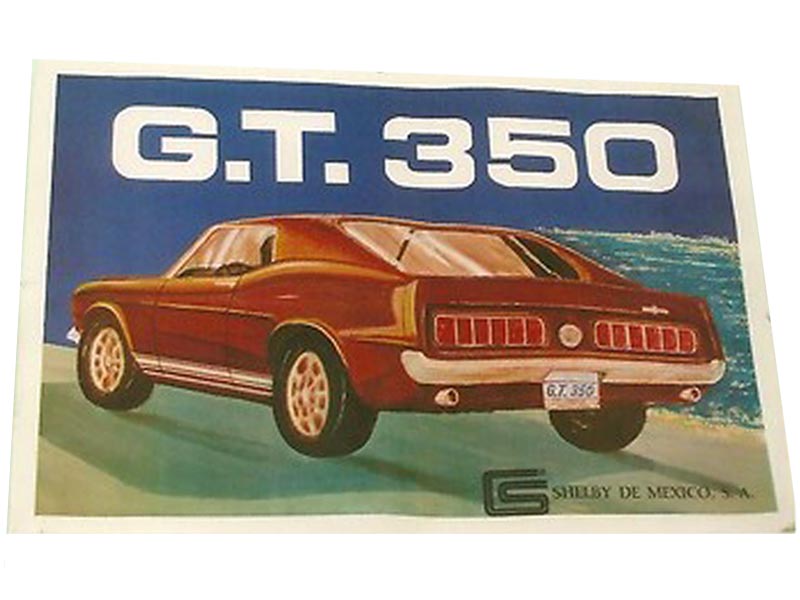 The Shelby de Mexico cars were based on Mustang notchbacks – because that was the only body style that was produced in the Ford of Mexico assembly plant. The cars received fiberglass body pieces and Shelby add-ons such as wheels, aluminum engine parts and emblems. Production was small – 169 cars in 1967, 203 in 1968 and 306 in 1969. Velasquez was, however, able to build the business up to the point where, by 1972, he was offering special models of the Shelby Maverick (powered by a 302 V8; approximately 300 were built), a Mustang GT351 (about 200 produced) and a luxury car, the Galaxie “Continental” (approximately 750 made in 1971 and 1500 in 1972). All of these vehicles were sold only through Ford dealerships in Mexico.

Shelby de Mexico also sponsored Mustang-based race cars in Mexican road races. They purchased one Shelby-built Mustang Group II notchback in 1966 and one car in 1967,and both cars were raced extensively. In 1969 they built two cars of their own and another one in 1970. Mexican rules allowed many modifications to the cars, including extensive use of fiberglass body pieces (hood, doors, fenders, trunk, etc). Of the five original Shelby de Mexico race cars built, only one exists today – a 1969 car. The rest were all destroyed in racing accidents.

The 1967 and 1968 Shelby de Mexico production models used 289 engines while the 1969 models were powered by the 302 V8. The 1967 and 1968 models received all of the 1967 Shelby-unique parts – fiberglass nose and hood, rear spoiler and taillights as well as cast aluminum 10-spoke wheels, sintered metallic brake linings, Koni shock absorbers, a larger front anti-sway bar, export brace and Monte Carlo bar, under-ride traction bars and cast aluminum “Cobra” valve covers, intake manifold and oil pan. When Carroll Shelby sold the “Cobra” name to Ford, one of the stipulations was that he was not allowed to sell any parts carrying the “Cobra” name in the United States. He was, however, able to sell these parts outside of the U.S. and he sold a great deal of them in Mexico through the Shelby de Mexico program.

The 1969 Shelby de Mexico model was, again, based on the Mustang notchback. The front was stock but a fiberglass section was added to the rear of the roofline, which curved back and down to meet with the rear fenders. The entire roof was covered with vinyl and this one change completely transformed the car’s silhouette and roofline. At the rear, 1969 Shelby taillights, rear panel and spoiler were used. Tape “GT350” side stripes were used on all cars. Shelby de Mexico models were built in six colors: Red, White, Black, Gold, Emerald Green and Acapulco Blue. Interior and vinyl roof colors were black or white. Shelby de Mexico production continued through 1972 with the building of approximately 200 Mustang “GT351” models and approximately 300 Shelby Mavericks. Both models carried Shelby emblems, Shelby aftermarket wheels and Shelby aluminum engine pieces. Both had rear window louvers, and front and rear spoilers. Additionally, the Maverick had a hood-mounted tachometer and a Boss 429-style hood scoop. No Shelby de Mexico cars were ever brought into the United States until 1986.